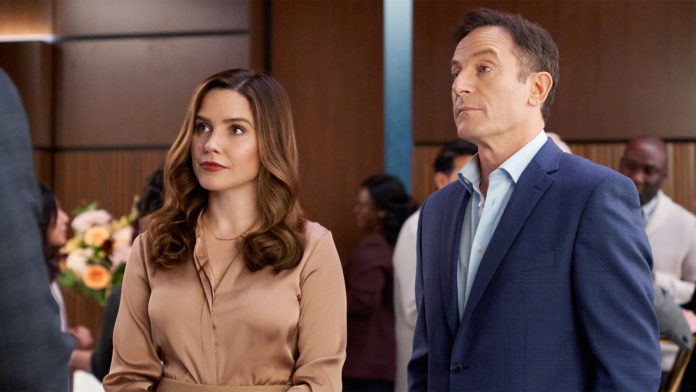 “I’m the only person in it doing an accent since they’re all Americans,” said Isaacs, 58, a native of England, who is best known for his roles as Col. Tavington in The Patriot, Col. Steele in Black Hawk Down, Lucius Malfoy in the Harry Potter movies, Captain Hook in Peter Pan, the Grand Inquisitor on Star Wars Rebels, Capt. Gabriel Lorca in Star Trek: Discovery, among many other roles in a career spanning nearly 35 years.

On Good Sam, which is currently in its first season and airs Wednesday at 10 p.m. on CBS, Isaacs (who also serves as a producer) plays Dr. Rob “Griff” Griffith, one of the nation’s best heart surgeons and the chief of surgery at the fictional Lakeshore Sentinel Hospital in Detroit. Although Griff is a brilliant doctor, he is pretty brash, rude, egotistical, arrogant, insulting, condescending, domineering, and just has nothing nice to say to anyone, especially the doctors under his command.

One of those doctors is his daughter, Dr. Samantha “Sam” Griffith (Sophia Bush, Chicago P.D.), who is his polar opposite. Sam is kind, caring, compassionate, decent, and has a charming bedside manner – the polar opposite of her father. She is also a gifted surgeon in her own right, something Griff won’t acknowledge.

In the first 15 minutes of the pilot after Sam and Griff are introduced, there is a random shooting at Lakeshore where Griff is caught in the crossfire. As a result, he’s in a coma for six months. The person who replaces him as chief of surgery is none other than Sam. On the night Sam’s appointment to her father’s previous position becomes official, Griff wakes up from his coma. The first thing he wants to do is get back to work. Then he learns Sam is now the chief of surgery, which doesn’t sit well with him.

The only way Griff can perform surgery again is with the approval of the chief of surgery. In this case, it’s Sam, who’s now his boss. Griff is not accustomed to following orders, especially orders from his daughter. He undermines her every step of the way, challenging her authority and medical expertise. This inevitably leads to them butting heads, scratching the surface of a very complex father-daughter relationship.

“The old world order is crumbling in which a man like him sits on the throne,” said Isaacs. “Lakeshore is a hospital where things turn out well and where the doctors are good people who want the best. That doesn’t mean it’s devoid of drama because conflict is drama and nobody buys tickets to watch ‘Village of the Happy People,’ but it’s a safe place in the storm. And God knows the world’s a storm at the moment.”

Caught in the middle is Dr. Vivian Katz (Wendy Crewson, Air Force One), Lakeshore’s chief medical officer. She is also Sam’s mother and Griff’s ex-wife. Both Sam and Griff separately vent to her about how working with the other is impossible.

“I’m a man with two daughters (with documentary filmmaker Emma Hewitt, his wife of 21 years),” said Isaacs. “My daughters… have long ago passed the stage where they think their father’s a moron – I’m not entirely sure they’re wrong in many aspects. It’s both the pleasure and the pain of watching them be able – maybe more able than me – to engage with the modern world. The story is something I could identify with and also the people running it.”

“They’re remarkable women,” said Isaacs. “Sophia, Katie, and Jennie were determined not only to tell personal stories, but the workplace would be a different environment – it’s run by women and led by women. It’s an entirely different atmosphere… It seemed to be a huge priority for them that people should want to go to work, that the workplace would be a place people would run towards rather than count the seconds to get away from. I thought that was intriguing that what was playing out on-screen was playing out off-screen as well… Everybody’s happiness and respect and the tide of kindness is unavoidable. It was so different than every other working atmosphere I’ve been in. I wondered whether it would be sustainable and it was.”

“She’s extraordinary,” he said. “She takes the happiness of the company desperately seriously… she wants it to be fun and wants everyone to be heard there. She walks the walk. She prepares meticulously for the things I barely look at. She arrives with this medical knowledge and a daunting, intimidating level of understanding of what the medical jargon in the scene means… I have no interest at all in that – ‘Tell me what button to press.’”

Isaacs continued: “At the same time as doing that and taking her work very seriously, she’s also a committed activist and doing two podcasts and – seemingly, to me – doing everybody’s interior decorations and juggling dozens of other projects at the same time. I’ve never seen anyone so busy and so organized and yet so ready to play. We dance a lot at work. It’s the only company I’ve been in where everybody sees each other on weekends as well. She’s the fairy godmother to all of us, even though she’s half my age.”

Isaacs will make his directorial debut with the April 20 episode of Good Sam called “Family/Business.” He really enjoyed directing.

“I loved being able to work that closely with the actors – they’re my contemporaries, they’re my friends – on the show,” said Isaacs. “I admire all of them. I know some of the things they’re great at and I know some of the areas they can be encouraged to do more… I knew the whole crew – I’ve worked with them for months, so they’ve been incredibly helpful and supportive. Plus, I’ve always been one of those people in scenes that many times over the years I’ve thought, ‘If I can only whisper this in that person’s ear, I think his performance might take off to a new level.’ And I got to try that, and they were all game to try it with me. I felt absolutely in my element. This is something I wished I’d done a long time ago and I intend to do some more.”