Heavy Color are a Toledo-based duo of avant-psychedelia composers. They talk a little bit about their work on the Rights of Nature documentary and using music to heal. 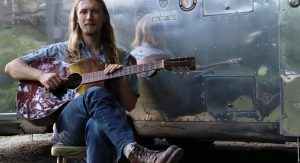 I keep to a couple of my own theories about folk music, and Lansing-based singer/songwriter Monte Pride is subtly, and even gracefully, confirming them on his new album, Even In Absence. If we distilled our motivation for listening to music in terms of the rewards that a finely-crafted song can provide for its listener, it